Sites of Special Scientific Interest (SSSI) are those areas of land and water (to the seaward limits of local authority areas or MLWS) that Scottish Natural Heritage (SNH) considers to best represent our natural heritage – its diversity of plants, animals and habitats, rocks and landforms, or a combinations of such natural features. They are the essential building blocks of Scotland’s protected areas for nature conservation. Many are also designated as Natura sites (Special Protection Areas or Special Areas of Conservation)..The national network of SSSIs in Scotland forms part of the wider GB series. SNH designates SSSIs under the Nature Conservation (Scotland) Act 2004. SSSIs are protected by law. It is an offence for any person to intentionally or recklessly damage the protected natural features of an SSSI. SSSIs were first designated under the National Parks and Access to the Countryside Act 1949. The majority of these were later re-notified under the Wildlife and Countryside Act 1981. All 1981 Act SSSI designations are carried forward, and all new SSSI designations are now made, under the Nature Conservation (Scotland) Act 2004.

Southannan Sands comprises a coastal section, subdivided into three discrete areas, which together support one of the best examples of intertidal sandflats habitat within the coastal cell covering the entire Clyde coastline.

The sandflats extend for over 4km along the coast, and are subdivided by Hunterston industrial developments. The marine construction yard and the coal terminal conveyor extend beyond the Mean Low Water Springs and subdivide the sandflats into three discrete areas: Hunterston Sands, Southannan Sands and Fairlie Sands. The sandflats are mainly composed of fine to medium sheltered sands, with a small area of mud/silt at Fairlie Sands. Extensive areas of the nationally scarce dwarf eelgrass Zostera noltei are a biologically and structurally important component of the intertidal sediment flats at this site. 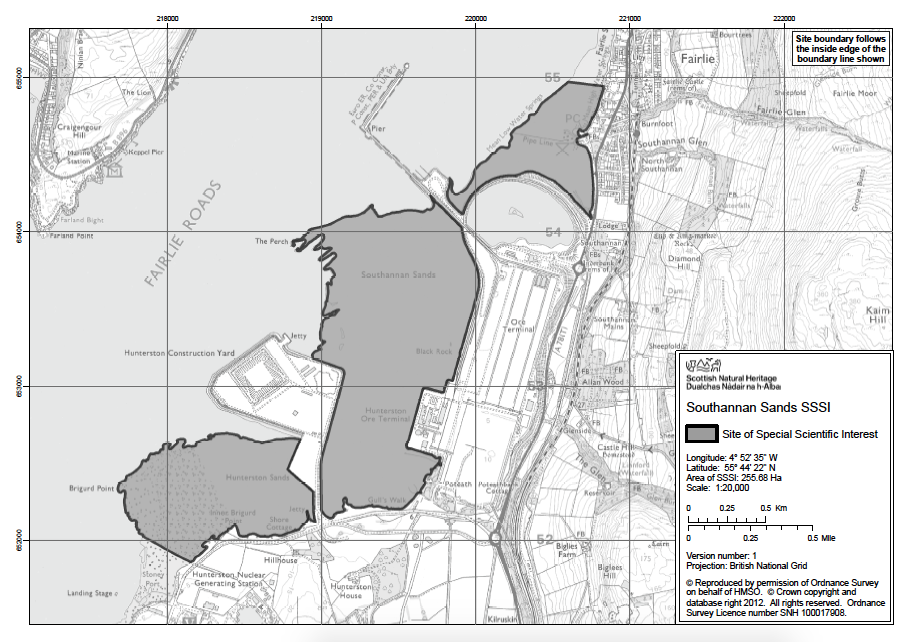 If you propose to carry out, or permit to be carried out, any of the operations listed below, you must first obtain consent from SNH unless a local authority has granted you planning permission (under Part III of the Town and Country Planning (Scotland) Act 1997) or a designated regulatory authority has given you written permission (under s.15 of the Nature Conservation (Scotland) Act 2004). If you have such a permission you may proceed without obtaining consent from SNH for the same operation.

This is a public statement prepared by SNH for owners and occupiers of the SSSI. It outlines the reasons it is designated as an SSSI an provides guidance on how its special natural features should be conserved or enhanced. This Statement does not affect or form part of the statutory notification and does not remove the need to apply for consent for operations requiring consent. We welcome your views on this statement.

Southannan Sands Site of Special Scientific Interest (SSSI) comprises a coastal section subdivided into three discrete areas, stretching from Fairlie in the north to Hunterston in the south and together these sections are of national significance for intertidal sandflats.

The sandflats cover an area of 255.68 hectares (ha) stretching for over 4km along the coast. However, the sandflats are not continuous, being broken by the Hunterston industrial developments, some of which extend beyond the Mean Low Water Springs and divide the sandflats into three discrete areas: Hunterston Sands (70.38 ha), Southannan Sands (150.37 ha) and Fairlie Sands (34.93 ha). The sandflats are mainly composed of fine to medium sheltered sands, with a small area of mud/silt at Fairlie Sands. Communities of polychaetes (marine annelid worms such as lugworms), crustaceans (including species of crab and shrimp) and molluscs (such as mussels and cockles) are present especially on the lower shores.

The extensive areas of the dwarf eelgrass Zostera noltei found on the sandflats are a biologically and structurally important component of the intertidal sediment flats at this site. Eelgrass beds are highly productive ecosystems which are utilised directly by grazers such as wildfowl and export their productivity in the form of detritus to support surrounding benthic communities. Eelgrass beds are also important sediment traps and stabilize the sediment, reduce the incident wave energy and may act as a natural coastal defence. Zostera noltei as a species is classified as being nationally scarce and eelgrass also is a priority habitat in the UK Biodiversity Action Plan (BAP).

Although not notified features of the site the sandflats support a variety of wintering, migratory and breeding wildfowl and waders, including species such as shelduck, eider, red-breasted merganser, oystercatcher, ringed plover, lapwing, curlew, whimbrel and redshank. The habitat is also important for fish species when flooded at high tide.

In 2005 a nationally scarce plant survey and in 2006 an intertidal habitat survey were carried out. The 2005 survey identified bait-digging on Fairlie Sands as having a potential impact on the establishment and survival of the dwarf eelgrass beds.

Past and present management

Southannan Sands was originally designated as part of Portencross Coast SSSI in 1971. Since then land within the original site has undergone a significant amount of industrial reclamation and development, including the construction of an iron ore terminal.

The site is currently used as a coal transhipment terminal, and was previously used as a marine construction yard. Within the site there is also an oyster farm in operation. The Hunterston nuclear power stations are located outwith the site, although some of the infrastructure is on land re-claimed from the SSSI. It is estimated that 170ha (40%) of intertidal habitat within the former Portencross Coast SSSI has been lost to land-claim since 1970 (JNCC’s Inventory of UK estuaries No.48).

The SSSI also falls within an area zoned for industrial development as stated in the North Ayrshire Finalised Local Plan 2003 – policy IND 4 Hunterston. The Hunterston area has also been identified for specific types of development by the Scottish Government as a ‘national development’ in the ‘National Planning Framework 2: proposed framework’. The need to address the potential impacts on the SSSI is specifically highlighted.

We wish to work with the owner and occupier to protect the site and to maintain and where necessary enhance its features of special interest. SNH aims to carry out site survey, monitoring and research as appropriate to increase our knowledge and understanding of the site and its natural features and monitor the effectiveness of management.

1. To maintain the extent of the intertidal sandflat habitat by ensuring protection from damaging impacts, in particular any future coastal development.

Coastal development could have an adverse impact on the sandflats through direct habitat loss and interfering with the natural processes in the coastal ecosystem.

Other factors affecting the natural features of the site

Hunterston is also identified in the National Renewables Infrastructure Plan (NRIP) as a potential site to support the off-shore wind industry (planning permission for a marine wind turbine test facility has been granted), and there have been discussions over the potential for a container port within the SSSI boundary. These development proposals all have the potential to have adverse effects on the sandflats feature of Southannan Sands SSSI.